The water vole is not a rat although some people may perceive it to be so. Unfortunately it is a small mammal that used to be the most common in Britain. Sadly like many of our songbirds and other species it is in serious decline through modern farming, inappropriate use of pesticides, rodenticides and poor predator control, the once abundant creature is now fighting to survive. 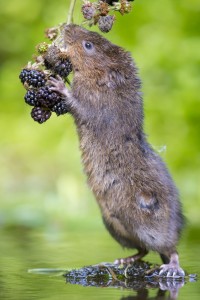 MBC Bird and Pest Solutions Owner, Tim Lester runs a game shoot in Dorset which also has an abundance of natural wildlife. Birds of Prey are encouraged to nest and breed on the farm as are wild songbirds, small mammals, insects and bats, Nest boxes and selected cover crops all assist to maintaining and aiding conservation on the shoot.

The farm has many varying terrains and diverse woodland with a river and chalk stream running through it. As part of the water vole and bird of prey conservation we do not use any rodenticides on the farm at all, the duck pond has a been excavated and banks built up to offer a safe haven for voles, all the felled trees have been left to rot to encourage insects and other small mammals to flourish, the hedgerows are ancient and are left intact along the river banks to encourage burrowing, the river is fenced to keep cattle from grazing up to the water’s edge and buffer strips are left with a diverse range of plants to protect the mammals from predators.

Predator control is carried out regularly particularly with mink and foxes, we do not wish to eliminate foxes from the ground entirely but the mink is a serious predator of mass destruction, it can climb like a squirrel, swim like an otter and run like an athlete, the mink is the chief culprit of predation on any bird or mammal that frequents the waterways or uses a burrow system for survival, a mink can follow it almost anywhere unlike the majority of indigenous UK predators.

The American mink was drip fed into the environment since the 1920s where they escaped from badly designed and poorly built fur farms, prior to any deliberate releases from animal rights activists.

The water vole is protected under the Wildlife and Countryside Act 1981 and is classified as a priority species in the UK Biodiversity Action plan.

We are hopeful that our efforts will have a positive effect and support the water vole to re-establish its numbers successfully as part of a nationwide project.

MBC Bird and Pest provide a mink control service to anyone concerned about the impact they may have on wildlife around waterways and in particular water voles, throughout Dorset and Hampshire.